A Short History of the Parish of Magherafelt

The early form of the place name Magherafelt has two elements, tech, meaning house/monastic house and Fighealta or Fidhealta which is clearly a female personal name and indicates that there was in Magherafelt an early Christian monastic house which was under the direction of a woman. The Christian Church in early Ireland, shortly after the mission of St. Patrick in the fifth century, developed into a monastic Church, and the spiritual needs of the population were catered for in little monasteries scattered throughout the countryside. By the twelfth century reform was in the air and at the great Synods of Kells and Rathbreasail, diocesan and parish boundaries were drawn up. The diocese of Armagh ran from the Boyne to the Bior or the Moyola and Magherafelt was the most northern parish in the diocese.

The new parishes corresponded by and large with the territories served by the early monasteries. Early seventeenth century maps show a church building situated presumably below the present day Bridewell at the bottom of Broad Street. This early medieval church was clearly in the lands that were under the sway of O’Neill of Tyrone. O’Neill had the traditional right to nominate the pastor of the parish. The long drawn out Council of Trent in the latter part of the sixteenth century had laid down the specifics of Catholic belief and brought about a new emphasis on preaching and teaching the fundamental elements of Catholic belief and the requirement for the future that all priests have a seminary training.

With the collapse of the Gaelic world in the early seventeenth century and the seizure of the lands of the native Irish indigenous population the church lands and buildings passed into the hands of the newly reformed religion, soon to be named by the English Parliament as the Church of Ireland. The church building was reported to be in ruins in 1622 and in much need of repair and this presumably was a result of the Nine Years War which had brought much ruin to the whole countryside.

The Salters Company in London which had been granted these lands in South Derry in the seventeenth century had, as their primary interest, profit and the state legislation against Catholics and Catholicism was not too rigidly enforced. There were reports of a Father Rory O’Hagan in the parish living openly and saying Mass. We can presume that according to the ways of the time that he was a native of the parish, as priests in those days tended to live and work in their own native parishes where they had immediate family and local support.

The seventeenth century being the century of the wandering friar it is likely that a Dominican from Coleraine or a Franciscan from Armagh or Dungannon would have served the spiritual needs of the people by celebrating Mass. There is no indication where these Masses were celebrated although the late Father Murray has recorded that there was a tradition in the town of a Mass Garden in Mullaghbuoy.

Teague Modartha McGlone told Sir Toby Caulfield in 1613 that he had been present at a sermon preached in Lisselby Roodan in the Barony of Loughinsholin (Castledawson) and that three Franciscan Friars had preached there, a Friar Mac Crodyn from Louvain, a Friar Henry Mellon from Armagh and a Friar Mac Cawel from the Pope in Rome. Mac Cawel or Mac Cathmhaoil was an outstanding theologian of his day with an international reputation as a scholar, and he was eventually nominated and consecrated Archbishop of Armagh but died before reaching his See. McGlone estimated that there was an audience of four thousand present at the sermon and that there were fourteen priests present. Lisselby Roodan is most probably a scribe’s mutilation of present day Lisalbany in the parish of Magherafelt. When in 1704 Catholic priests were required to register, Owen Mc Kivir came into the town of Magherafelt from Ballinderry and registered as Parish Priest of Magherafelt, Tamlaght and Ballinderry. 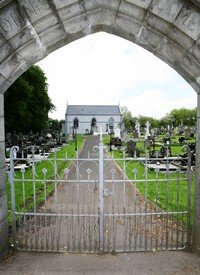 In 1792 when the Penal Laws were still in force, but really only nominally, the Catholic people had a church building placed discreetly outside the town on the road to Castledawson, the present St. John’s Church at Milltown. It was according to the Ordnance survey plain in its structure and appearance. It may very well originally have been a gift of a barn from a local Protestant landowner. There is a plaque over the front of the building indicating that it was refurbished in 1831. It has more recently been refurbished by Monsignor O’Byrne after a fire in 2002. St John’s served the people of Magherafelt until Canon Patrick Donnelly built the church of Our Lady of the Assumption on a plot of land donated by the Salters Company in present day King Street. This beautiful church, one of the most beautiful in the archdiocese, was officially dedicated on September 10th, 1882 by Dr McGettigan, Archbishop of Armagh. The sermon  was preached by the Bishop of Raphoe, Dr Logue, later Cardinal Logue, Archbishop of Armagh.

In 1889 Canon Donnelly invited the Sisters of the Holy Family to the parish. The Sisters have made an immense contribution to the life of the parish and the surrounding area in the cultivation of Christian values, to the work of pastoral care, and to the development and promotion of excellence in the field of education at primary and secondary level.  Monsignor Ward (1925-50) founded St Mary’s High School (now St Mary’s Grammar School) in the face of strong official opposition and placed it in the early years under the direction of the Holy Family Sisters. It is now rated one of the most outstanding Grammar schools in Northern Ireland. 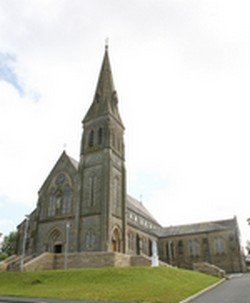 After Catholic emancipation in the early nineteenth century a new vigour and cohesion returned to Catholic religious practice, and confraternities and sodalities played a significant role in Church life. Canon Mark Quinn PP (1951-1976), is fondly remembered for his promotional work in these areas and for his promotion of the Pioneer Association. In 1964 Canon Quinn established St Pius X Intermediate School (now St Pius X College).  It catered for boys and girls in the parish of Magherafelt and neighbouring parishes. This school, refurbished splendidly by Monsignor O’Byrne, PP, in 2003, has gained a high reputation both in academic and extra-curricular fields.

Cardinal Logue in 1896 dedicated the church of St Trea at Newbridge. This church, an outlying church of the parish of Magherafelt, serving the Newbridge/Ballymaguigan area, dated back to 1831. By the end of that century the church was in need of major refurbishment which resulted in a virtually new building. The refurbishment was carried out under the direction of Canon MacNiece, PP (1893-1901). St Trea, a contemporary of St Patrick, had, according to the Tripartite Life of St Patrick, been blessed by the great saint.  St Trea is thus witness to a long and continuing tradition of Christian values, belief and practice in the South Derry area. Newbridge became a parish in its own right in 1993.

The village of Castledawson and its immediate surrounding area formed the most northerly part of the archdiocese of Armagh, and of the parish of Magherafelt. To serve the spiritual needs of the ever growing Catholic population in the area, Monsignor O’Byrne, Parish Priest of Magherafelt, undertook to establish a new church in the centre of the village. This new modern church, dedicated to St Patrick, was officially blessed and opened by Archbishop Seán Brady on 6 May, 2001. 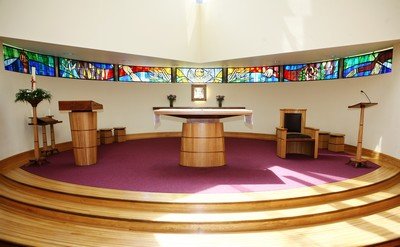 Medieval parishes normally had an erenagh family or church family which in the main looked after church properties and often provided priests for the parish. Mulholland was the church family in Magherafelt and the first priest recorded for the parish is Malachy Mulholland  under the year 1425. Also mentioned under the same year is Neale O Corre. In 1440 a William Duigin is recorded, and in 1534 a Bernard O Luchron, no doubt a member of the distinguished clerical family, settled in Donaghmore in Tyrone. Also mentioned in 1534 is Seneskyn McDowyn or McDyvyn and in 1537 the famous Torletus O Donnelly or Terence Donnelly who was later Dean of Armagh and who accompanied Shane O’Neill on his visit to the Court of Elizabeth I.

In the difficult years of the seventeenth and eighteenth centuries Rory O’Hagan (1631-32), Owen McKeever (1704), Teague Corr (1744-1766), John O Mulhallen (=Mulholland 1766-1781), Arthur Teggart (1782), Patrick Kelly (1818-1822), all served as Parish Priests of Magherafelt. Teague O’Corr, a doctor of the Church, was also responsible for the Parish of Ballinderry, as was John O’Mulhallen. O’Corr lived at Ballyronan and he was uncle to Arthur Teggart, who also had Ballinderry under his care.

Additional information for inclusion on this page is most welcome, please contact Anne at the Parish Office with details, 7963 3635

Apostolic Workers is a group of people who raise funds for mission projects in the Third World. The group meets in the Convent on the third Tuesday of every month.
Contact Mrs P McKee, Tel. (028) 7963 1386

SPRED is a Special Programme of Religious Education for those with learning disabilities. The Magherafelt group has been in existence for eighteen years. Membership includes special friends and faith friends. There is a yearly programme and the Diocesan Coordinator provides ongoing training. The group meets every TUESDAY evening.
Contact Mrs M O’Neill, Tel. (028) 7963 3481

The Mission Statement of the Catholic Guides of Ireland is:
“To provide a challenging Guiding programme within a safe environment, to enable all girls and young women to develop their full potential.”